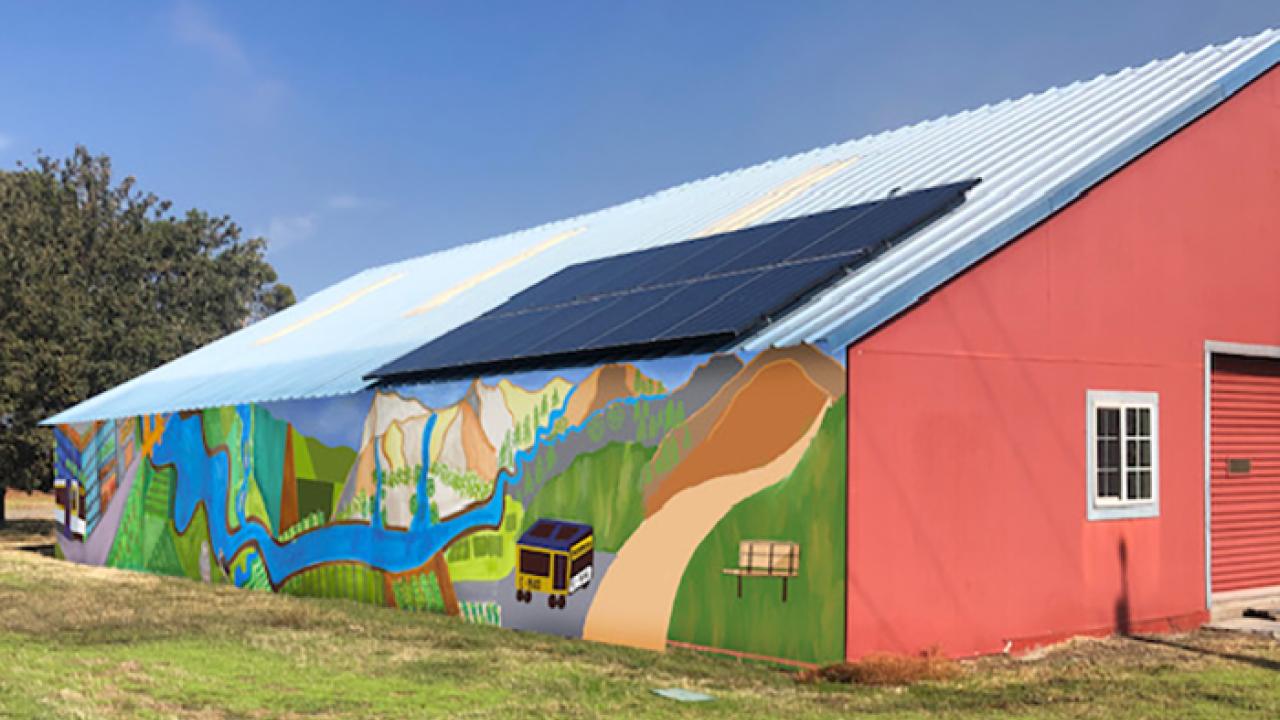 As part of an effort to spread awareness on climate change and agricultural issues in the Central Valley, Sustainable UC Davis in partnership with the UC Davis Institute of the Environment and the One Climate Initiative launched a 21st-century “barn raising” mural competition over fall quarter 2021 for undergraduate and graduate students.

To mark the conclusion of the mural design competition, the winning design will now be painted on a local almond farmer’s barn off County Road 102 between Davis and Woodland on March 26.

For the competition, students were asked to identify a climate-related agricultural issue in the Valley, take a stance on it, and then develop a mural proposal that visually communicates that position to the public. Rachael Dal Porto, a current graduate student in civil and environmental Engineering won the first prize in the competition out of 27 submissions. Her design, “Hungry for Connection”, will be painted on the barn. The event will serve as an opportunity for community members to join in and paint a portion themselves (similar to a life-size paint by numbers). A local professional muralist, Leon Willis will be in charge of painting a sufficient component to ensure the mural is successful.

Ashley Green, director of development, Strategic Initiatives, has been working with big climate activists Mike Russell and Steve Shaffer for a year who were looking for avenues to connect with students. After many inspiring rounds of discussions, they thought art could be a potent space for students to generate conversation around climate change. In recent years, the Central Valley has often been fraught with threats emanating from climate change — from low lying rivers and charred vegetation to extreme heat, water shortages and harvesting concerns — thus, the challenge lay in designing a contest that would hinge on two questions:  How might agriculture be part of the climate solution in the Sacramento Valley? How do we visually communicate this message to inspire local action?​​​ “So we brought the project under our One Climate Initiative, because it really fits with our mission,” said Green.

The project was led by Emily Schlickman, an assistant professor of landscape architecture and environmental design who got connected to the vision of making art a medium to inspire change. She conceived the mural design project in fall 2021. Schlickman led a seminar where students got to interact with artists and muralists from all across the United States working on climate change messages. The seminars were designed to inspire students to think about the ways they can effectively communicate climate change using paint as their primary medium of messaging. Importantly, these sessions helped students brainstorm ideas and develop proposals.

Schlickman and her team also brought in local experts dealing with climate and cultural practices which provided students with the necessary resources to understand the efforts of the farming community in mitigating and adapting to climate change.

According to Schlickman, many progressive initiatives addressing climate change undertaken by the agricultural community often go unheard because of lack of visibility. She also sees this project as a catalyst for expanding the network and developing a larger vision of addressing climate issues in the Central Valley.

“Our dream would be that this turns into a climate art trail. Perhaps, barns and silos that are embedded in the agricultural landscape can be used as canvases in the future, so it can become a destination for people to go and learn about climate activism,” concluded Schlickman.

Click here to register and join this community event on March 26.